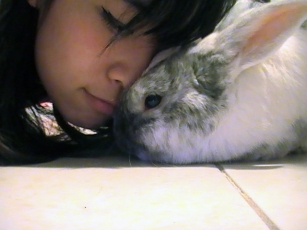 I’m not really sure how to start off this post but I guess it’s by saying this xD Today I went through all the pictures I own and compiled around 560 pictures of Hunny into a folder. These pictures are me with him, my family with him, and him just flouncing around, laying, eating, etc etc xD I’m quite amazed at how many pictures I do have of him but I’m really glad I took them. This picture above is one of my favorites cause he actually snuggled back to me surprisingly enough xD He was a bunny that knew who loved him… and that I do.

But this morning I woke up to a distress call as Hunny was not okay… he apparently was whining and had seizures. By the time I got to him I think he took his last breath…. and that I couldn’t believe. How I didn’t even get to see if I could do anything for him. (but at the same time I’m glad I didn’t see him in pain) We don’t understand what happened… he had no wounds visible and no crying out in pain (other than the whimpering I heard he was doing from the kiddos later). I was the one who told my mom and brother that he wasn’t breathing anymore and… that threw me into shock. I just kinda sat there and looked at him for the longest time. Afterwards was just… ugh. If you ever lost a pet you’d know.. especially if you were with him almost everyday…

So I couldn’t really… be alone especially at home. Gee couldn’t get out of the house but he was able to gather my friends and let them keep me company xD They are crazy kids and drove me up to my favorite boba spot and we ate, talked, shopped… and the fun part was when we went to this cute little park that had the craziest looking contraptions for the kids! It was seriously so fun. I kinda forgot about everything which is exactly what I needed. It’s also really nice to know my friends would just pick up and drive to me when there is a crisis o.o But I would do the same thing too…
Just knowing that makes me happy.
Being around my mother… does not. For some odd reason she thinks talking about it bluntly is gonna help. Nope. I don’t think so. >.>

I’m back home and kinda soaking in all the feels again…. it’s not that bad though. I have people around and he’s right… it’s better xD As for hunny… he’s in bunny heaven probably making friends with more dogs and cats (rather than other bunnies). I’m sad knowing that he might’ve gone in pain but I am glad to know he’s probably having a blast somewhere xD

So to you my Hunny Bunny, I’ll always love you, and you’ll always be my only Hunny <3