Its a food post =3 We went out for burgers the other day! And… this is how it was served… with a knife… stuck through it. Just to make sure it was dead xD I’m not sure how a person is suppose to eat it cleanly but I saw kids do it sooo…. we must’ve done something wrong? lol! Always love it when the serve a pickle on the side like that ^^

I was suppose to blog last night but I didn’t even get a chance to go on the computer o.o Didn’t even play a game! I was out all day with Gee and studying as well as starting on the props. Which.. made my work a little more complicated cause I didn’t plan it out T.T That was my fault though… I should’ve read up on it more. Also watched a movie! wo! Nothing new though, Fast 5 I believe. Really makes me want to watch the latest one….

Anyways. Today? Woke up early and did some cosplay work. I got some resizing done as well as a zipper put onto the school outfit. I also am bringing my pikachu backpack back and forth to the office with all my cosplay stuff I need to work on xD It’s quite useful~ Kinda sad my backpack ripped since my sister used it so much =.= (I hate that, I barely used it and it’s already dead by the time I want to…) So I just studied all day. Had to chauffeur my sister around. Had a super quick rush dinner =.= And more studying. Worked on the ear commission a bit (wo!) and now I’m debating on what to do. My test is Thursday and I’m super nervous for it. My scores are getting better but this is such a hard topic T.T and it just gets worsseee!!! ARGH. What’s also really frustrating is that so much is riding on it. It’s not like failing a class and just doing the hassle of taking it over, it’s literally just. Pass or I might be out of work (or find a job -.-)

My kickstarter isn’t going anywhere lately. I don’t have the time/brainpower for it….. and I NEED that T.T 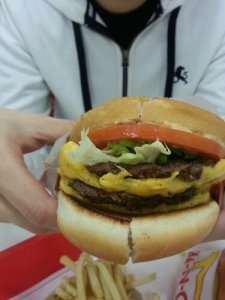 First day of spring session =3 Yea…. it didn’t start off well with some good old minor road rage (people REALLY need to learn to drive correct as well as not so dang fast) spin my mother’s nagging at me and no breakfast… You have the perfect first day!!

…okay. So maybe not. But see this burger up there? It wasn’t mine… but it was suppose to be a regular cheese one and he got a double double xD fatty much? xD Even with a burger… man he’s … he’s…. (insert legendary word here) What? Okay I’m a little mushy >.> Something about a man in white? LOL! AND black. Just enough of both~

Enough about him >.> And his royal fattiness. Who now is telling me not to run away from him…. don’t ask.

Yes! The first day. Got coffee. Got a tummy ache. Lack of food (leading up to these glorious in n out burgers) and …. going home early to play LoL! Oh man. We’re addicted so badly… if you haven’t gotten the gist of that already xD

Today was just not a school day. Well it WAS a school day but…. no one wanted to go to classes lol!! It was like “ugh… no wanna go” which is probably why I was really tempted to ditch classes. But I decided that since tests are next week… I’ll go to class and just reward myself later~ Hence.. THE FOOOOD~~~ I wont say anything about the drinks behind the food though >.> But I have found something I Really really like xDD The burger was also really good too… spicy xD Oh we went to TGIF =3 it was happy hour!! Should’ve gotten like a lot of appetizers though…

Also we found that every impromptu shopping trip…. someone buys something. Last time was Hea buying a blazer. This time Gee bought a really nice shirt for a good price~ and next time it’s apparently my turn! xD Hey,,,, I don’t mind. As long as I stop spending $20 on dinner every thursday >.> Dang friends, so expensive!!!

I haven’t eaten at Red Robin in the longest time.. it’s their Strawberry lemonade that makes me always want to go!! This time.. even though my teeth hurt and my mouth in general isn’t in the greatest condition… I decided to get a burger…. >.> I couldn’t resist! T.T So all three of us had a burger (mine was a lovely BBQ one.. YUM!) And in the middle is a cup of the strawberry lemonade (which they call something else…. I forgot o.o) which was a bottomless refill kinda thing but between the three of us we only finished two glasses o.o kind of crazy actually. I wish I was able to drink more >.>

Today was.. crazy. Last night was too >.> Which is why I completely forgot to post!! I had registration for classes at 8am this morning so I slept late figuring out what I could do and freaking out.. then woke up super early to register. Then I made a bunch of calls and ended up having to go to school to get forms filled out, signed, and turned in. Then I went back online to add another class which means I have a straight SIX HOUR class time with no break. ……. so I might just petition another class and leave the late classes for next semester >.> I don’t want 6 hours T.T

Annndd…. so I spent the rest of the time today studying a bit even though Gee is notorious for bothering the crap out of me and being so. dang. distracting!! -.- So we went shopping… again~ Which is all fine with me. I found my ddress…. might buy it friday~ ^^