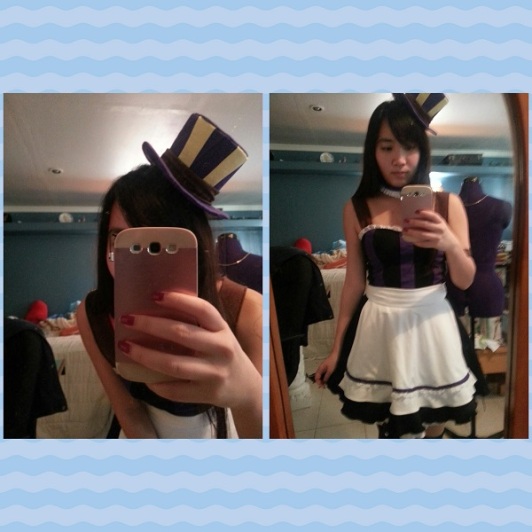 :D So I joined a group on a whim called Summoner’s Cafe! It’s pretty much a fan service cafe where they hold events all themed for League of Legends!! I know.. not really my type of scene especially since I can’t act cute in front of people so often. >> BUT, Caitlyn, the character I maido-upped, is kinda a serious type of person and a bad arse sheriff! WITH A RIFLE! Sooo. Yea. Hopefully less cute and more sassy on my part~ I thought I’d try something different and it’s a way to meet other people :D Plus I’ve been to a few events because of the group and it’s been a learning experience. Although I do have to admit at times I feel a little ostracized as I’m one of the new girls and kinda going in this without knowing anyone…. I’m an awkward person so I don’t think that helps me at all either T.T BUT! I mean… hey. for the love of league~~ <3 Although the Tera playing and Hearthstone has been more apparent lately xD

So I took some selfie pictures awhile back cause some people needed to OK the outfit design~ Although after taking the picture I realized I needed more white on the top so I added cute frills to the top brown straps~ I like it :D Was fun to make since I used a really nice thick knit fabric that just is SO soft. Both the white and black is soft to touch and I just wanna pet myself. … … ok yea that was a weird sentence LOL

Like my hat? Made out of foam. =3 I accidentally squished it and it just popped back into it’s shape!

To see the photoshoot picture you can go here to Summoner’s Cafe FB page :D

Now onto some other designs of my own!

One thought on “Trying to be cute”