Wo! :D Seriously last minute cosplay…. I was talking to Gee and somehow logic led me to adding another cosplay onto my AX line of cosplays! Yea… I made good progress on it today =3 Have the base of the skirt done and a bow~ You can see both on my fb =3 I’ll be revealing what it is once I get some more of it done and I can actually wear it!!

So yea… I’m already on a tight schedule so if you don’t hear from me… well I’m alive! Just… hauled up away in some corner growing my fabric stack xDD

And since I named this red….

You know I really appreciate the arts a lot.. but that doesn’t mean I appreciate other things too! I was at a restaurant … I think Islands Burgers and it was playing some surfing and snowboarding on their TVs. I was just looking at it in awe as people were able to do such cool things on a board and be so.. fearless o.o That kind of skill you just see and you can’t… hate it. Just.. awe’s everywhere xDD But that thought then translated to other things! Like Singing and dancing! Both take a lot of control and a sense of being outgoing.
Now then I thought about cosplays… where I’m hoping people, regular normal people who don’t really know about it, can appreciate all the hard work that goes into making a flawless and detailed outfit/props. I’ve gotten comments where people thought I bought a cosplay instead of making it but what they probably don’t realize is that someone has to make it to begin with. It’s all man-made. So even store bought clothes I can see the work (and the not-work where it looks horrible). So no, I don’t buy my outfits. If I buy a piece I usually state it somewhere xD Usually like a dress shirt or something though…

That’s my rant.. xD Back to creating… and drooling over some artwork xD <- that’s another one. We know art has to be created by someone… so it’s never argued it’s fake like autotune or machinery… which both is really just a helping tool to make everything look a little nicer xD But I think people start to appreciate something more once they try to do it themselves and realize how difficult it is. Oh the rants =.= sorry! 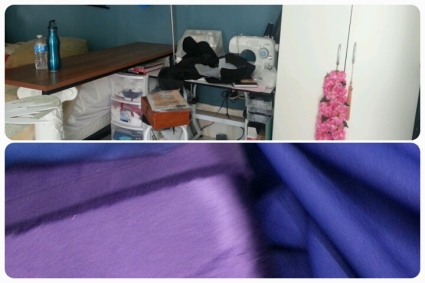 I’m SUPER excited today cause.. guess what =3 MY DESK GOT AN EXTENSION XDD The brown part being held up by columns is my new “extension” I dunno why but my mother has been helping me out more with my sewing and designing so I guess that’s her way of being supportive. Although I can live without the naggy comments >.>;; But from the looks of how my sewing space has been growing…I can’t complain xD

I went fabric shopping with the dopples and GEe for their fabric for their AX cosplay! It would have gone better but … I was hungry and tired.. and I get a little loopy when that happens. even if it’s a joanns! So I dunno why I added that picture in there lol~ Purple and blue doe xP

Oh hohohohoho!! SORRY FOR THE LACK OF UPDATES.. I don’t even have a good reason why.. wait.. waiiit.. yes. yes I do. blame Gee and getting me back on Tera. Freakin I love playing that game T.T Something about it just makes me really escape into some fantasy world =3 Def want to make a cosplay from Tera >.>;; Once my lovely character gets something cuter than a jumper… although at this point I doubt it T.T Archers are suppose to be cute! Not jumper cute but… cute!!!

So my brother had a graduation party which was suppose to be small but it seemed so crowded and so many people!! I was quite surprised. But I think what was most surprising was the fact my mother custom ordered this cake which was like O.O CAuse we got through 2 books and the last book on the bottom was UNTOUCHED. Now keep in mind that wouldn’t have bothered me but we were give 3 other cakes that we have to finish somehow T.T So I’m like… cake overwhelmed. Plus I’m trying to eat healthy so it’s been super hard >.> (especially with a tub of thin mint ice cream in the fridge… seriously. whoever made that stuff is MEAN!)

And my Josie dressform came in handy cause people thought it was cool that we were able to display my brother’s gown from graduation. I think it was cool but my dad now wants to keep it up until my brother passes the bar exam. And dude.. that’s not for another 2 months! TWO MONTHS. So the end result of all that was my daddy buying me another dress form because I need one to sew with =3 And lucky timing since I’ve had my eyes on one~~ So I’m excited!

(ps that’s not Gee in the picture, that’s my cousin xDD) 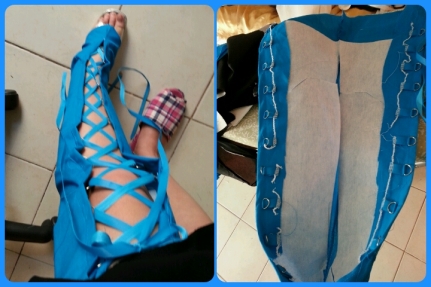 So a good part of today was spent on cosplay! I decided to take some time out and work on these babies that I haven’t touched in a LONG time~ So I cleaned up the hot glue I used all ghetto-ly and now I have Dee rings to actually lace them up! But now I have a problem cause it kinda waves… so I’m getting stuff tomorrrow to make that all nice and straight~ hehe =3 Sorry that it looks terrible on the inside =.= This is my problem when I re-do my cosplays…. >.>;;

I also was able to get the wings drawn out and hopefully just get them cut out tomorrow and then I get a nice day of cleaning for a party this weekend =.= Oh the fun… xD