YAY! Cosplay day! and selfies ftw xDDD The selfie was from a work day where I spent most of the day sketching! It’s always fun to just sketch all day =3 But then I get bored and go “man I need to actually make make something”~

So Fridays are always so eventful =3 We decided to move our butts over to Gee’s place and have an actual cosplay day! Yea. Actual. Not a “lets go out to eat and play some games” but an actual day to work on patterns and props =3 Mainly props it seems cause that’s what will take a good chunk of our time. I worked on patterns for Gee’s AX cosplay and a small piece of mine. So you can see the boys kinda talking out some prop work while I was sitting at the table eating ice cream (LOL~my work xP)

It was fun though, we got to take a sneak peak at the intro of the remastered final fantasy X~ And then also got to play some Dynasty Warriors! It was really fun…. and then food coma cause his mother just feeds us until we’re coma’d on the extra comfy couch (which I tried to avoid this time so I wouldn’t sleep >.>;;)

Today I went to the store and bought applique stuff though. Spent a good $6 on two items that will hopefully be enough to cover 2 cosplays =3 Now looking at fabric at Joanns is very unsatisfying compared to the prices downtown… but actually finding the fabric I want is quite easier I have to add. Plus its pleasant knowing you don’t have to ask for the prices of each and every fabric >.>;; 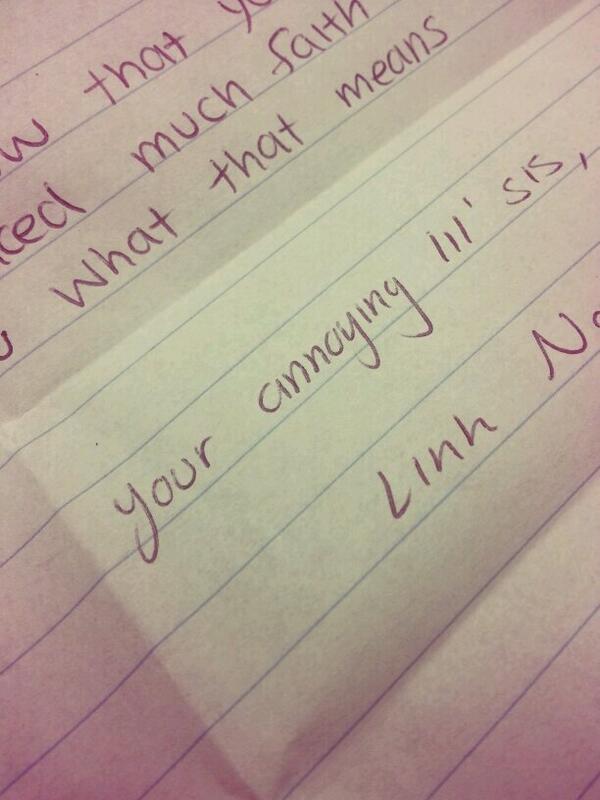 Isn’t it adorable? My sister went on a church retreat this past weekend and family members/sponsor writes the candidates a letter with memories and good feelings. So in return the candidate is able to write a letter back which she did to me and it was adorable~ I think lately she’s needed it more and more as the high school life can get really… distracting.

I remember when I went on the retreat and it was my.. junior year of highschool. I was pretty much… the shy person back then and definitely not like what I was now xD But I think that’s good cause I remember not really enjoying the retreat as much. The only thing I enjoyed was the nature and being able to wake up before everyone else and just skip rocks on the stream that went behind the cabin I was in xD I remember getting the letters and getting all the feels from it… it really reminds you of how much the people around you love you~ I tried to look for the letters last night but couldn’t find them T.T So that’s kind of sad…

Anyways… maybe this little event will make her a little more nicer to me than what she’s been lately >.>;;

Look at dem sexy ears~ xDD I finished updating the Jolteon ears! So they’re.. bigger and better ^-~ I tried to take picture nicely but… I think I was in a rush from picking up my sister and then having to run back to work =.= Anyways.. the ears actually got bigger! I think it’s because I saw my ears and went… “hmm… a little too puny lookin” But I should really be slowly weeding out the ears from my shop… Find something else maybe?

Ah! And look, pacchi =3 He’s been good to me lately… definitely been need cuddles >.> Which… since the office and working life it’s really easy for my metabolism to lower… so I’ve been trying to eat healthier and less junk food (which I’ve been LOVING chocolate and those sour patch kids lately… and more chocolate) but it’s proving to be quite unhelpful with an arsenal of snack around as well as tedious work that just makes me always want to snack.. endlessly.

Other than that… I think I’ll work on planning and what not while I try to get back into shape. T.T MY METABOLISMMM!!

We went off to an art store and found puzzles! I really wanted this butterfly one!! Buuuut… I decided that it looked kinda weird int he front.. and I want something a little more.. challenging >.> I am having fun looking for decorations for my office space though =3 Tax season is almost over and I just can’t wait *-* It’s gonna be cray cray tho xP

So my days have been particularly… boring. just watching my tv shows… doing work here and there… and brooding about how my life isn’t what I thought it would be o.o But that’s just the depressing stuff xD I’m hoping things will turn around soon… (that’s the only way to really think at this point right?)

I had so much to write but I’ve forgotten…. oh! I went shopping at forever 21 today and found nothing I liked o.o Although I do like how they have plain dresses for me to dress up … but theyre always made weirdly and out of cheap material >.> So I’d rather just make my own dresses at this point xD But that doesn’t mean I don’t shop and buy~

And mother recently bought me pants ….. I’ll have to get a picture of it. It’s… quite different. Definitely not my style. (although I dont see why my mother is trying to change my goodie classy style into something else)